I spent 4 days in Kolkata and this article tries to share my experience. I wanted to do something different, having seen most of Laos, Cambodia, Thailand and China. Air Asia had very cheap flights Bangkok-Kolkata (Calcutta) and it was really different. I could have made the whole trip, including airplane tickets for less than 10,000 baht.

It was the first time I was in India and I enjoyed it. 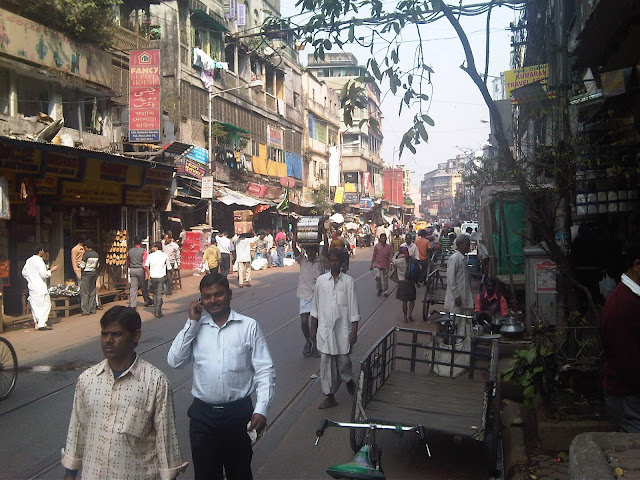 A street, in Calcutta

I left early on Sunday (10 am) and arrived at about noon. I didn’t sleep that night so I was pretty tired. That first day was a mess. At the airport, I changed some money. Too much cause the rate was not good. And the gave me one the biggest amount of bills that I ever had. I was told to book a prepaid taxi and I did. About 250 rupees to the city. After 5 minutes in the cab, i was switched in the middle of he road to another vehicle that was not a taxi but a friend of the taxi driver. That was strange! We stopped another time cause the driver had to urinate beside the road, in the middle of the city. He finally arrived at the wrong hotel, aft I showed him the name, the address and a map! Google map came back to rescue me and I showed the taxi driver where to go! Welcome to India! This was my hotel.

I booked a cheap hotel online because i needed a reference. Ad at the airport, the also asked me where I would be living. The benefit to book in advance is knowing where you go, not to worry about it. The disadvantage is maybe paying more, and not to be sure to get what you asked for.

I forgot to say that I lost my camera in the airplane. So, all pictures were taken with my phone.

I was very tired when I arrived cause I didn’t sleep the whole night.

On my street, people were washing their clothes and themselves in some ‘communal water facilities’. The water is from the river, which is a lower part of the gange. Roads were dirty, traffic is heavy and noisy, the place is polluted. I never seen a place so noisy and they drive dangerously. They are actually encouraged to drive with the horn. It’s a way to communicate with the car. I needed food. It was cheap and good. Kebabs, rolls with kebab, fry dal and others. Always 10 to 40 baht, so 1 dollar or less.

I booked a walking tour for the next day and was anticipating that cause I was not impressed by my first day. But I was tired.

The next day, David came to pick me up at 10 am. He’s Australian and have been in Calcutta for 12 years or so. To what I understand, he goes back half the year to Australia to work in a youth offender facility. I also heard he teaches.

David was a wonderful guide. We went into small streets of the city, passing through some markets with spices, desserts, flowers, the old Chinatown and he was explaining me how people were living, how the garbage was managed, about fruits, buildings, temples, history and religion. I couldn’t have a better guide. We also crossed one of the most busy bridge in the world on foot, drank milk tea (delicious – and I brought ingredients to make some) and we took a ferry and the subway back home. I loved that day. Sincerely, we hardly saw foreigners where we walked. We were deep into the city, living he typical Monday in Kolkota. Walking tour in some small streets…you need to see all pictures to understand what it was. The link is below to see the pictures.

On the way, David met Vernon. He knows him for 10 years. Vernan lives on the street and can speak English very well. Most Indian can speak English. Vernon has only a small locker with all his possessions. Half a meter cube. All his possessions. David paid for some glasses and eye examination. 3 days later, someone stole Vernon’s glasses. This is what I wanted to see and know: REAL people. Vernon was a gentleman and I understand he had some family problems. After that, he lost everything and went on the street. He sometimes works, but with his age, it’s difficult. David gave him 100 rupees, and I did the same. Vernon didn’t ask anything. Dadid (left) and Vernon. His locker was just in front, on the street. This is where he lives.

The next day, I had planned cooking lessons through David. I went to the home of a Indian (Bengali) lady and to the market with her. We cooked fish, dal, some fried Indian dumplings and more. It was also ver nice. During the lesson, i received some bad news from Thailand, someone I loved very much died. It disturbed my day, but there was nothing I could do. I had planned doing some volunteer work on the next day but didn’t feel like it after that. However, food was delicious, and if you want to see how people live in Calcutta (i don’t like calling it Kolkata) I would strongly suggest these walking tour and cooking lessons. Don’t get me wrong: I hate travel agencies and normally, never use them. I prefer doing my stuff myself, reading, going into unusual places. But because i was limited in time, i just asked David to take care of that. Cooking lessons in a Calcutta house..

I have to say why I wanted to go in Calcutta:

– because it’s India
– because the flight was cheap
– AND because I love cooking, enjoy Indian food and wanted to buy spices.

I also always want to try new things. I always enjoy to do something different. THAT was different!

It was fantastic and these people were great. This is the website of David (his partner is Martin): The victoria monument is beautiful. A kind of Taj Mahal (not joking, made in marble, awesome) constructed for Queen victoria. The problem is that you can not take pictures inside, and the exhibitions inside and not really interesting. It’s not the Guggenheim museum or the Louvres!

The India museum is one of the largest and the first established in India. There are numerous rooms and you will find everything: rocks and stones, prehistoric artifacts, skeletons of actual or extinct animals, paintings, sculptures, a room about Egypt, etc. But sincerely, this place needs huge renovation. It’s located in a nice building but the presentation is made in cheap plywood, or behind plastic glasses, with low light or decorations from 50 years. You have marble flood and cheap curtains. Great paintings with bad lighting and reflections on the glass. Horrible. And i like art. I can understand that Calcutta is quite poor and they probably don’t have the funds to renovate the place… You won’t see in my pictures (I think) how bad the state of the museum is.

It was still early and i needed to go to the place and the person that most people know from Calcutta: mother Teresa. She was born in 1910, in Albania. She died in 1997. She devoted her life for the poor and won the Nobel prize for peace, and more than 700 other awards.

You can not take pictures of that place or the sisters working there. Only the tomb and a statue can be photographed. 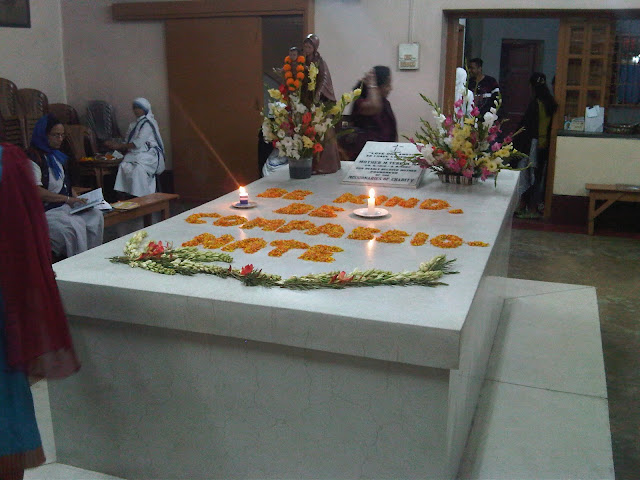 I saw the room where she used to live, a small room, with a bed, a table. Very simple. She only used one pen and lived without almost nothing. For her, to have nothing was freedom. There is an exhibition showing and explaining her life. With her sandals, her last bag. Her tomb is just beside and you feel the holiness of the place. I made a small donation in Canadian dollars, Thai baht and rupees. I had all of them on myself and thought it would show parts of me, or the fact that the whole world recognised what is done by these sisters. By the way, I’m not a believer and surely not a fan of religions. But I might be a dreamer…

I had some great pastries and a last meal before going back to my room. I was leaving the next morning early, with luggages full of spices.

Will i go back to India? Probably. It was dirty, noisy, beggars are constantly annoying you, but overall, It was a human experience. I met wonderful people. If you think Thailand has problems…just go in India and find out by yourself. I am quite lucky to live in Thailand and I do appreciate it. Sincerely.